You’ll find me at http://shesaprettygoodchristian.com  Never fear, my humor has not left me.

Oh yeah, EmmaLou, Golden Destroyer will be a part of the new blog, no doubt.  See ya over there. 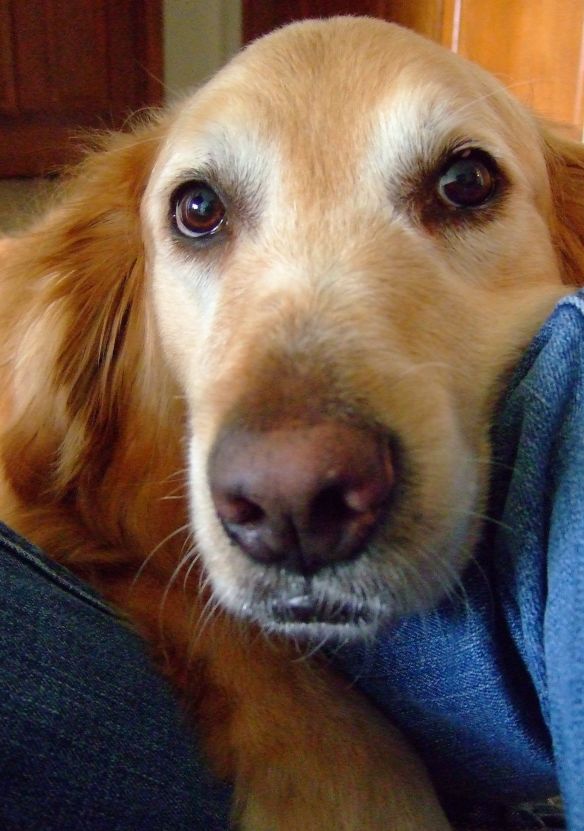 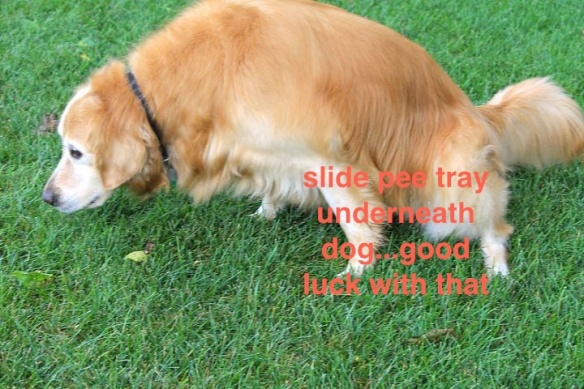 Sweet EmmaLou, Golden Destroyer has had some health issues of late.  The most annoying one (for all of us) is a stomach problem — she has issues with digesting her food and she burps louder and longer than a longshoreman.  Poor Em!

She willingly went to the vet’s because she likes it there.  I don’t like it at my doctor’s office, but I’m not a dog.  Anyway, the vet is aware of the issue; Em’s been on meds prior to this visit.  But, the problem returns.  He suggests obtaining a blood sample, giving her her annual shots (which were due), refilling her heartworm and flea prevention meds, and oh, here’s a plastic tray…please get a sample of her urine.

This morning bright (well, actually it was dark) and early, the whole family goes out to the backyard to obtain a pee sample from EmmaLou.  I was on leash and flashlight duty; Devoted Spouse had the little (and I do mean little) plastic tray at the ready.  Em sniffs around, squats down, I yell at Devoted Spouse, “NOW!”, he slides the tray under her and EmmaLou jumps straight up in the air taking her precious pee with her.

Take Two:  “C’mon sweetie puppy girl…pee in the cup.”  Yes, dogs can get a hateful look on their faces.  Finally she squatted again and we repeated the above exercise.  It didn’t work the second time, either.

Devoted Spouse took EmmaLou out on her morning walk, where she peed like someone who’s had their bladder stopped up for a month.  Peed all up and down the street.  Did we get a sample?  No…forgot the tray.

While running errands, I stopped in the vet’s office.  They laughed and laughed but finally agreed I could bring her up late in the day and THEY would try the little plastic tray trick.

EmmaLou and I, meanwhile, have decided we should never speak of this barbaric intrusion into her personal life again.  Sigh… 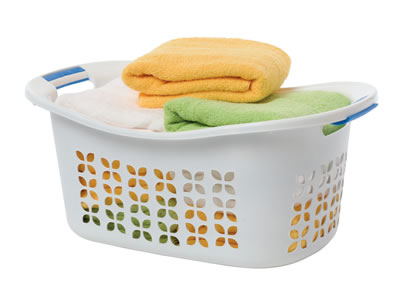 Reacting to my aching back and the fact I announced I was about to carry some loads of laundry to the basement, the conversation went like this:
Me:  I’m gonna take down some laundry in a little while.

Devoted Spouse:  No, you’re not.

Seriously, this is my life…sigh… 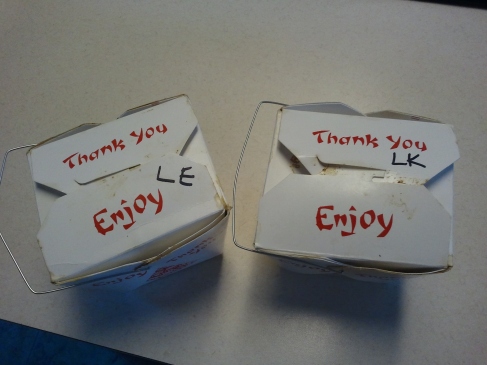 But this particular book made me so sad because it dealt with a married couple who simply could do nothing but hurt each other in new and vicious ways.

You see…I love the stuffin’ outta Devoted Spouse.  Here’s just one reason:  He labels our Chinese take-out boxes with our initials so when I want to finish what I ordered, I don’t have to waste time opening all the boxes.

So, in a way, reading the terrible book was good for me because it reminded me how loved I am!  sigh…

Are you like me and have just had it up to there with passwords?  I tried to access a site earlier and couldn’t remember my password.  Thirty minutes later, numerous screens, error messages, and two emails, I still don’t know the password.  That’s 30 minutes of my life I could have spent doing my cardio work-out.  (insert hysterical laughter here)

When I worked in a cubicle farm, a majority of us would stash our computer passwords under our keyboards.  We all knew each other did this, but nobody said anything because, of course, it was not an allowed practice.  But it was easy to remember.  And, that’s the problem with passwords — only a 12-yr old can remember any of them.

I tried using the same password for everything.  That fell apart when some jerk hacked an email account.  I got the notification, panicked, and realized I had 70 hundred thousand million passwords to generate.  And they all had to be different.  And I had to have them in my head and be able to retrieve them.  Oh my.  This would never work.

I got the bright idea of jotting down passwords in a small notebook.  That failed when the notebook fell on the family room floor somehow and EmmaLou, Golden Destroyer, had a midnight snack.  Ack.

I had heard about smart phone aps that took care of passwords.  I quickly downloaded the latest ap.  I loaded all my passwords into it, then gave it a password.  Guess what I forgot?  The password to access my passwords.

I created an Excel spreadsheet and put all my passwords there.  Then I thought it would be a good idea to print it out, so if I died unexpectedly (like from a password event-generated stroke), Devoted Spouse would be able to get into all my records online.  But the spreadsheet was too big for my printer paper.  I had to scotch-tape the printed pages together.  It turned into such a mess, I shredded everything and opened a bottle of wine.

There seems to be no easy solution to this.  I have a copy of the spreadsheet that wasn’t taped together. I threw it in a file folder to deal with later.  I just don’t remember what I did with that folder…sigh…

All text and personal photos on this site are protected and may not be reprinted without the express permission of Crone and Bear It.

Welcome to the home of the red headed stepchild. All rants performed by a professional blogger on a closed course; don't try this at home. These opinions are my own and reflect no other organization(s) or person(s) - don't you hate disclaimers?

Wish I Had Said This

My theory of evolution is that Darwin was adopted. - Steven Wright

Some people are like Slinkies. They aren't really good for anything, but they still bring a smile to my face when I push them down a flight of stairs. Patricia Briggs